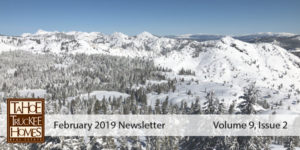 Record snowfall in February brought sales numbers in almost identical to snowmageddon February 2017. Squaw Valley reported just over 300 inches or 25 feet of snow in February this year eclipsing their biggest single month snowfall record which was January 2017. You can probably imagine the challenges of selling property with snow piled everywhere, roads that are nearly impassable at times END_OF_DOCUMENT_TOKEN_TO_BE_REPLACED

"Matt worked with us to find our house in Tahoe Donner four years ago, and recently to purchase a lot in Gray’s Crossing. We can’t say... continued"
- Rick & Debbie B.
View All

By working with Tahoe Truckee Homes, you work with our entire real estate team. All of our team members work together to support each other and to make sure that all of our clients are completely satisfied. Each of our team members chose to be a part of Tahoe Truckee Homes because of their love of real estate, the local community and a common business ethos: always put your clients first while providing honest and straightforward advice.