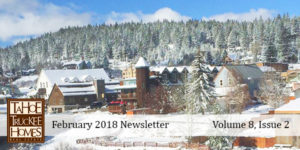 The early signs of a dry winter may be starting to surface. Likely not in the way you think. At the end of February 2017 we had huge amounts of snow everywhere and it was a struggle to just get around let alone sell real estate. The thing to recognize is that prior to the second week of January 2017 when snowmageddon started the year had actually been fairly dry. That is actually a good thing for real estate around here. It is always helpful when you can see a house from the driveway and get in without having to climb over giant snow banks or piles of snow left behind by the snow removal company. Since it takes typically 30 days minimum to close most sales, the February sold stats are transactions that started in January. All that said I am not surprised the February 2018 sales are stronger then last year simply because it was so warm and dry through the whole month of January. The discrepancy between 2017and 2018 may show up more in the final March closings since the difference in snow fall for the month of February 2017 vs 2018 were tremendously different.

How well did we do this February, how about a 12% increase in sales over all. The Squaw Alpine area doing best with a 75% increase in sales from 4 in 2017 to 7 in 2018. Realistically that is one of our heaviest snow regions so the effect of snowmageddon may have been hardest there. The Tahoe Basin is also doing very well this year with an over 50% increase from 14 sales last year to 22 this year. Greater Truckee saw a very modest 10% drop from 29 to 26 while Tahoe Donner was exactly the same as last year at 18. What will March numbers bring is a great question. The only reason I could see March numbers being similar is because inventory this year is coming back slower then ever.

Low inventory has been a hot topic realistically for years. The sad part is that it is getting worse not better. Our total inventory this year is down just over 30% from this time last year. That is a huge number and creates a long lasting impact. The difference might actually be even worse than that because it is in comparison to last year where again, we thought we had very low inventory issues because of all the snow. We are in the supply and demand battle zone right now and it would appear sellers are winning. Values continue to rise as buyers snatch up whatever they can find that works. It is not crazy increases by any means but a very steady pace. We are getting ever closer to that magic market price level that equals the previous peak of 2005. I suspect we will match or more likely surpass those levels later this year.

(530) 563-6513
Contact
New Listing Alerts What's My Home Worth Market Reports
"I come from a real estate background and I was in the industry for 10 years earlier in my career.  Tahoe Truckee Homes is a boutique agency... full testimonial"
- Jim M.
All Testimonials