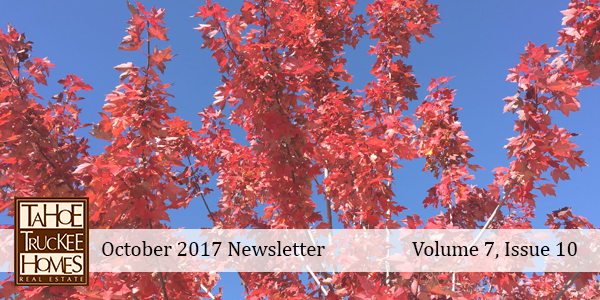 I believe I have used this line before but not sure what else to call it. October sales in the basin were more than double the year before. Condo sales were up 50% while single-family home sales were over double going from 22 in October of 2016 to 50 this past month. Perhaps 2016 was a bit of a low anomaly at just 22 sales but even October 2015 was at 30 single-family home sales, which would still make this year nearly 70% higher than that. The Squaw Alpine markets weren’t too far off that pace either nearly doubling from 9 to 17. Greater Truckee had a much more modest growth of nearly 25%. Tahoe Donner saw a bit of a mixed market with single family home sales actually falling slightly from 35 to 33 while condo sales grew 50% from 6 to 9. With nearly 300 pending sales in process currently it would appear the year is going to close out strong.

There are some external forces in the market that are making things hard to predict. First and for most is the new tax reform bill in Congress. Some of the terms could have significant impacts on California especially. How will this impact our local mostly second home driven market? I don’t think it will help. If we are forced to pay taxes on our taxes this will mean less funds for those discretionary things like second homes and vacation weeks and weekends. I certainly don’t want to be a “dooms dayer” and have everyone think the sky is falling but I do want to raise the importance of contacting your local Congress men and women. The California Association of Realtors and National Association of Realtors have been sending out multiple calls for action from our members. Another external factor impacting our local market is the Napa, Santa Rosa and Sonoma fires. I was representing a buyer in a purchase when the seller lost their primary home in the fires. I know at least 3 other transactions that were affected because of losses from the fires. Other forces to keep an eye on are insurance, especially after the fires and interest rates. With a new Fed chair anything is possible.

It would appear winter is trying to make an early appearance. With the first storm back in September and then another in October we move in to November with a very wintery forecast at least for the first part. Many days of wet cold weather ahead. This looks to be good news for ski areas as Boreal and Squaw both indicating they will be open before Thanksgiving. Now anything is possible so no predictions just yet about a wet or dry winter. I have been saying for a while now after last winter, how about just a good, normal, average winter. I think that would be great.

October At A Glance

(530) 563-6513
Contact
New Listing Alerts What's My Home Worth Market Reports
"Whether you are hoping to sell or purchase a home in the Lake Tahoe area, Matt Hanson at Tahoe Truckee Homes is your guy. Matt helped us purchase a condo... full testimonial"
- Nellie, Paul, and Sheila
All Testimonials