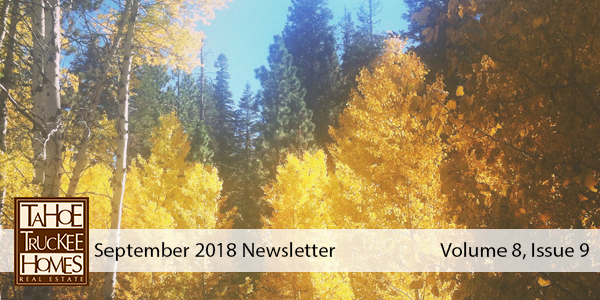 A little bit of everything. Overall sales remained strong though it seemed we started to see a slight market shift. Sales volume did increase in Tahoe Donner but declined in the basin, Squaw / Alpine and greater Truckee. By the numbers TD increased sales from 29 to 37 or 27% while the basin dropped  from 66 to 52 or 19%, Squaw / Alpine dropped from 16 to 6 or 62% and greater Truckee dropped from 72 to 45 or 38%. Of note in Tahoe Donner the increase numbers were almost exclusively in condominium sales not single family homes. The other considerable shift was in Squaw / Alpine where there was just 1 single family home sale compared to 5 last year.

There is a lot of speculation in the real estate industry right now. Markets are slowing but it may not be for the reason so many people think. The fear of the bubble is weighing on many. While values may be peaking I think it will be primarily an affordability issue not an over evaluation issue. Until we start seeing an inventory supply that gets back to historic levels I think we continue to see values hold. The market may go flat for a while, as wages and affordability catch up, but a bubble burst seems unlikely. Now we do have a midterm election to get through and a very volatile stock market so no guarantees of course.

This months letter is coming out a little later then normal. Ok, a lot later then normal. It is for a few reasons, we finished our house and started moving in for starters. It was a big push and took a lot of effort from many people. We also were closing a few more transactions pushing Tahoe Truckee Homes to what looks like will be our busiest year ever. We also added another licensed agent to our team so we now have 6 agents plus myself. Our property management home inventory continues to grow. There is still very strong demand for long term rentals. Ski leases are off to a sluggish start which may be reflective of the limited snow fall last winter. Vacation rentals had a great year and booking for the up coming holiday season is off to a great start. That said, if you need to rent a place for the holidays or coming winter I would suggest checking in with Lauren (530-563-6513 or Rentals@TahoeTruckeeHomes.com) sooner than later.

(530) 563-6513
Contact
New Listing Alerts What's My Home Worth Market Reports
"Our experience with Matt Hanson was simply outstanding. We moved to Truckee about 3 years ago and knew we wanted to call this amazing place home.... full testimonial"
- Troy & Kristi D.
All Testimonials